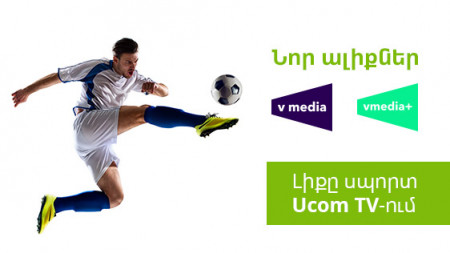 As of today, all Ucom TV subscribers will have access to the first Armenian sports TV channels: the "Vmedia" and "Vmedia +". These TV channels will simultaneously broadcast football, basketball, tennis, Formula 1 and a number of other sports, and tonight Ucom's football fans will watch the final match of the UEFA Super Cup, which is "Chelsea vs. Villarreal".

"Within the framework of the #UcomSport activities we keep on sharing the good news with all our uTV subscribers and sports fans. UEFA Europa League, UEFA Europa Conference League, UEFA Champions League, UEFA Super Cup, UEFA Youth League, Serie A, La Liga, Bundesliga – all these are already a reality for our subscribers, who are fond of sports," said Ara Khachatryan, Director General at Ucom.

Let us add that one can watch documentaries, feature films and TV series about world sports figures via these TV channels. Moreover, the programs and films produced by the two TV channels will also feature stories of different athletes and sports fans.

15:45 IDBank and YSU summed up the results of the scholarship competition after Gevorg Arshakyan

19:20 Make payments via Idram in online stores, get free delivery or a cashback and take part in the draw

17:21 UCOM has officially launched the sale of IPHONE 13

17:20 Ucom hosted interns of russian CBOSS corporation for a month

13:46 UCOM prolongs the unlimited internet offer for the level up 4700 and level up 5500 subscribers

15:57 Ucom employees received recognition for their services to the homeland

19:11 IDBank as a sponsor of the charity concert "Armenian Rock for Children with Cancer"

19:56 "The Power of One Dram" to overcome childhood cancer

17:46 IDBank prematurely finished the placement of the second tranche of bonds of 2021

13:37 Unibank will celebrate its 20th anniversary organizing a festival of intellectual games

11:23 "UDAYS" special offer at UCOM: disconts for all smartphones and accessories for 2 days only