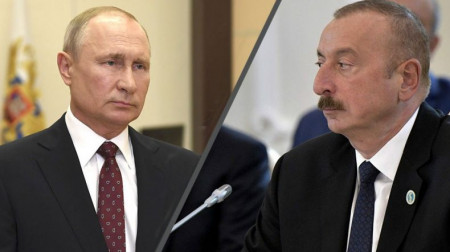 Russian President Vladimir Putin had a telephone conversation on Thursday with his Azerbaijani counterpart Ilham Aliyev, in which the developments concerning Nagorno-Karabakh were discussed, TASS reported, citing the Kremlin press service.

"Discussion was continued of the situation surrounding Nagorno-Karabakh, its further stabilization in line with the statements of the Russian, Azerbaijani and Armenian leaders of November 9, 2020 and January 11, 2021," it said.

According to the press service, the presidents discussed, in particular, "issues of ensuring peace, security and progressive social-economic development of the region, as well as the course of work to restore transport communications," it said.

The results of the Russian-Armenian summit talks in Moscow on April 7 were taken into account, it added.

The presidents of Russia and Azerbaijan agreed "to give a boost to contacts in various formats," the press service said.

On Aril 7, Putin held talks at the Kremlin with Armenian Prime Minister Nikol Pashinyan, in which Nagorno-Karabakh was also the focal point.